Useful links for ultra runners before the 2018 race! 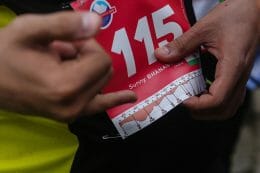 Want help to book a flight to Pokhara? It’s a flat rate of $125 one way, but 30 minutes instead of 6-7 hours on the road. http://annapurna100.com/book-a-flight/ Still need a hotel in Pokhara or Kathmandu? Fill in this form, we have options for you with some of the other runners. http://annapurna100.com/hotel-booking-request/ Interested in the race […]

Dear all participants/sponsors/friends, I deeply regret that the Main Organisors decided to postpone the 9th Annapurna 100K/50K Race due to the reasons stated below in the interest of the safety and security of all participants coming from abroad and prevention of problematic situation and inconvenience this sad decision had to be taken and the new […]

Aite and Manikala retain their crowns and Hong Kong sweeps foreign category in the mens 100km and ladies 50km. Race report by Ramesh Bhattachan  MoD, Amiam (UK), 2GR, Race Director The 7th Annapurna 100 Race was held on Saturday 9th March 2013 starting from the beautiful touristic village of Dhampus, lying in the shadow of […]

Discounts and offers for 2012 participants

We’re negotiating various discounts and offers with companies we know to offer good services. Hopefully this will make your time in Pokhara a little easier. You’ll find this info in your welcome pack at registration. Sherpa Adventure Gear Sherpa Adventure Gear are also a sponsor of the race. Race participants can get 10 % off […]

Just a quick pointer to new things on the site (not much!): Important: we need your passport number before 25th December. Newsletter #1 and newsletter #2 went out for participants. And newsletter #3 is here! We added a list of registered foreign runners on the site here. Sorry to the 6 French runners – you’re […]

If you are a regular ultra runner, and have not seen this already, you may be interested to partake and help the medical community understand what we’re doing to our bodies! Have you ever wondered if running long distances is healthy? Even though the answer to this question might not change our behavior, it’s been […]

Thanks to Pawan and his capable and generous team at Himalayan Map House. Rather than see the route on the day, or try to work it out from the Google Earth route posted last week in the newsletter (see the 2011 monsoon newsletter here if you missed it), have a look at this on a […]

10km was missing and we went to find it. It was somewhere lost in the hills, behind a protective bureaucratic barrier, that was to prove unassailable… This year we’ve decided to change the Annapurna 100’s 100km course to finish in the same location as the 70km and 50km courses, in the small village of Birentanti. […]

We’re really pleased with our new flyer which reflects what you’ll hopefully be seeing after about 30 km of running! Obviously we’re trying to entice more people to come to the race so please feel free to adore this on Facebook and spread it to running friends who might be interested trying something great on […]