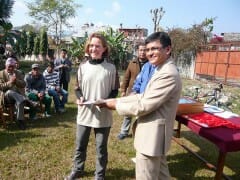 We were honoured to have Lizzy Hawker come and run in the 5th Annapurna 100 race. We got back to her some weeks after the race and asked her to reflect on the race and her experience.

Michael Maddess gave the Annapurna 100 a nice write up from a professional’s perspective in Action Asia Magazine.

It’s only February, but already plenty of people know what they are going to be doing on New Year’s Day 2012. For us here it’s really heartening to see that people are so enthusiastic already. We almost feel guilty that they have to wait another 10 months! On our registration form, we ask people for […]

Annapurna 100 is a UTMB Qualifying race

The Annapurna 100 race is now a qualifying race for the Ultra-trail de Mont Blanc (UTMB) – yet one more reason to add the 2012 race to your running plans for the coming year. Points awarded are as follows (though correction to be made to the 75 km appellation): ANNAPURNA 100 (100Km) Trail Nepal 2011 100km […]

The results have been nicely formatted now for easy reading and no Excel necessary. Just click below!

“Saaya number aayo!” (Hundred number has arrived!) This year, as last year, the numbers were given out pretty randomly and even a bit chaotically. This year though we decided to make sure the numbers were in Nepali, to show that it is a Nepali race and also to give an interesting souvenir for the foreign […]

A message from the 3 Sisters

As you may know, the 2010 Annapurna 100 race had zero Nepali female participants and only three foreign women running. We decided to make a big effort to try and change that and to some degree it worked. This year there were 10 foreign female runners, including one of the worlds very best, Lizzy Hawker. From […]

This is the 50 km course GPS data recorded on the wrist of Kimmo Keinanen. Key facts: the GPS measured the course at 51.2 km with 2,443 m elevation change.